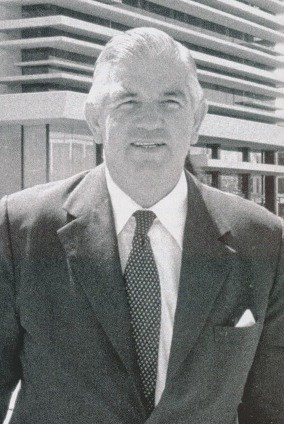 Born in Queensland, Sir Edward Williams served as a pilot in the Royal Australian Air Force before studying law at the University of London. Returning to Australia in 1946 he worked as a barrister and was appointed a judge of the Supreme Court of Queensland in 1971. In the late 1970s he presided over the Australian Royal Commission of Inquiry into Drugs and was a member of the United Nations’ International Narcotics Control Board. He was appointed Chairman of Australia’s National Crimes Commission in 1982.

Williams received his Australian of the Year award primarily for his work as head of the Brisbane Commonwealth Games Foundation. He was described at the time as ‘the man who was responsible for the greatest exhibition of national pride ever, the Commonwealth Games.’ Williams was a long serving Chairman of the Queensland Turf Club and later served as Commissioner General for Brisbane’s World Expo 88.