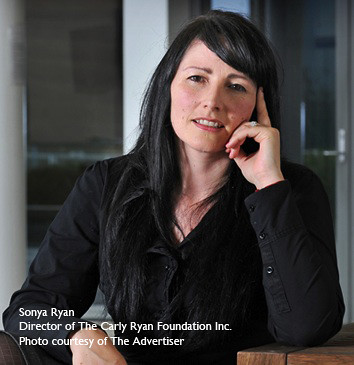 For the past five years, Sonya Ryan has dedicated herself to the promotion of internet safety through the Carly Ryan Foundation established in memory of her daughter Carly.  Befriended by an internet predator posing as a teenage boy Carly was groomed by the middle-aged man who convinced her to meet him. Tragically that meeting in February 2007 resulted in her brutal murder. Filled with grief and despair, Sonya did not turn inwards, instead reaching out to others to ensure that similar tragedies could be avoided. Sonya is now a frequent visitor to schools where she tells Carly’s story to warn of the potential dangers inherent through internet interaction. She alerts children and their parents to the multiple identities used by cyber paedophiles to groom children and win their confidence and trust. Sonya says she will continue her campaign to have online safety made a compulsory component of the national education curriculum. Through the Carly Ryan Foundation, Sonya also provides counselling for victims of internet crime and provides police with information to help prevent crimes against children.